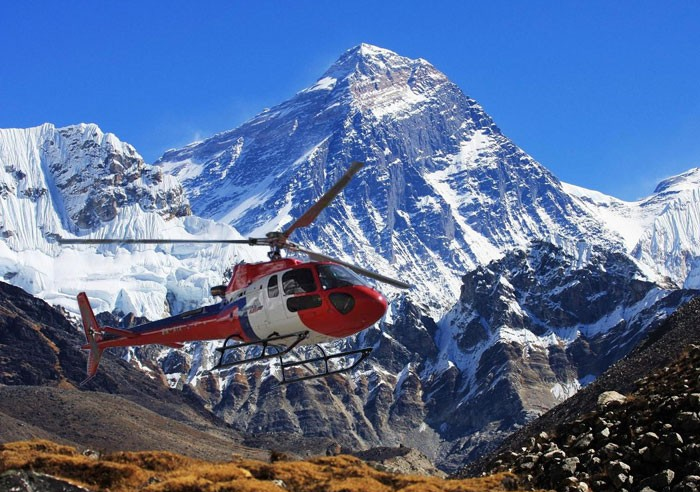 Fly to the roof of the world; in comfort and bliss.
While many people are caught up in the busy chaotic schedule when they want break from hustle and bustle of cities, shortest and easiest way to explore Mt. Everest is overwhelming the adventure world. The 1 day Everest Base camp helicopter Tour with landing is an ideal package which demands just 4-5 hours of a day. Additionally, the helicopter tour to Everest is accomplishable by every age group including children and elderly. Furthermore, you don’t have to be an Olympian or healthiest to experience Mt. Everest now, with reasonable fitness you are all set for the journey. The helicopter trip to Everest is doable in every seasons of the year, so why not venture in this cheerful summer?

Summer in Nepal is never alone. It steps in with Monsoon. The blend of summer heat and rainfall chill keeps the environment warm, refreshing and revitalizing. And you won’t have a great time rather than this summer to venture into wilderness. The thrilling helicopter ride engulfs you to the world of Himalayas in an instant with comfort and safety. Winding over green hills, tantalizing rivers, huge pastures, old Sherpa settlements, artistic Buddhist monasteries and finally over the summits of incredible mountains, you experience the greatest euphoria of life. By the same token, you breathe the pristine air amongst the glorious cordilleras which stand dominating the skyline in the most magnificent way.

How is the journey going to be like?
The Everest Base Camp Helicopter tour begins with intoxicating flight from Kathmandu to Lukla airport. Within a short flight (about half an hour), you shall have glimpse of Nepalese adverse geographical topography ranging from hills dissected by rivers, mountains like Mt. Langtang, Ganesh Himal, Mt. Dorje Lakpa and more on left, to the sloppy lands with settlements and field right in front. Everything you view is jaw dropping and insanely alluring. Furthermore, the flight resumes after filling fuel over the Everest region showcasing the cluster of colorful roofed houses built upon the inclined hills, world famous Monastery of Tengboche which lures with its Mani Rimdu festival and Gorak Shep; a popular stop for the Everest Base Camp Trekkers before they finally step at the foot of Everest.

Everest Base Camp helicopter flight gets more surreal as you approach the glittering snow covered hills. The early sun rise in summer adds blushing in the Himalayas. In contrast, if rainfall occurs then it is more likely to downpour at evening or night gifting fresh clear mornings. Just immerse yourself in the moment and capture the nature sculpture at best like never before. You notice the astounding Mt. Everest with its companion Mt. Lhotse as helicopter flies ahead the longest glacier of Himalayas; Ngozumpa glacier greets directing ahead to the turquoise Gokyo Lake, hidden Khumbu glaciers and Everest Expedition Camp I and Khumbu icefall.

The helicopter lands at Kalapathar and you have a short break of 10-15 minutes for capturing the mystical sculpture of nature in your lenses. To avoid the chances of being victim of altitude sickness, the helicopter flies as soon as possible from Kalapathar. Ahead, you land at Everest view Hotel. The hotel has become an indispensable part of Everest region since its establishment. Located at high altitude, the hotel has pure mountainous ambience. You can witness Mt. Everest from Hotel without obstruction and they serve cuisines ranging from Chinese, continental to healthy Sherpa soups prepared according to the original recipes. After breakfast, you fly back to Kathmandu retracing the same route.

Why summer?
Trails of Everest Base Camp Trek in summer have fewer trekkers. Correspondingly, Kalapathar and Everest Base Camp are at its best tranquility with fewer visitors from the trail and the helicopters. You get awesome opportunity to savor the beauty of Everest region without crowd.

In like manner, weather of Everest Base Camp in summer during the helicopter tour is fine to travel. Although monsoon hits, it usually occurs at evening or night. You have fresh bright mornings which are great suit for helicopter tour. Similarly, you won’t have a freezing cold temperature which can penetrate through your spine but do wear warm clothes. The summer sun kisses the Himalayas early mornings providing the warmth as well.

Conclusion
There definitely is no pair for the Helicopter tour to Everest Base Camp if you truly seek exhilarating adventure in the shortest time. As Jenny Han quoted, “Everything good, everything magical happens between the months of June and August.”, it might turn greatest reality of your life if you are bracing yourself to embark the Everest Base Camp flight with landing at the foot of gorgeous Mt. Everest. 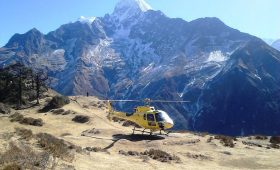 Experience Everest Base Camp Heli Tour: Once in a Lifetime 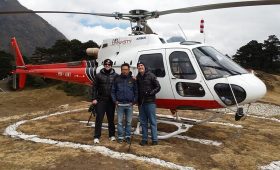 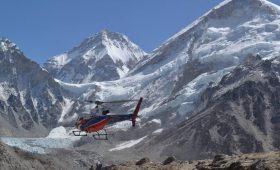 Everest Base Camp by Helicopter